Comments Off on Have a heart for Darren’s walking challenge

Have a heart for Darren’s walking challenge 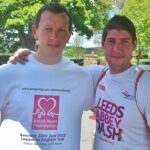 One of our sales team is embarking on an extreme walking challenge in aid of the British Heart Foundation.

Darren Holmes, who manages the UV litho on plastic print sales, is walking from London to Brighton as part of the British Heart Foundation’s London to Brighton Trek on June 22 and 23rd.  It is described as the ultimate walking challenge as competitors have to complete the 100km in less than 30 hours.

The British Heart Foundation is a charity close to Darren’s heart – his father, Stephen Holmes died suddenly of a heart attack aged 59, five years ago and his uncle also had a heart attack 14 years ago, aged 53.  Darren will be competing with his aunt’s husband, Phil White, who last year had a triple heart bypass and his friend Brian White.

“It’s a fitting way to mark the fifth anniversary of my father’s death raising money for the charity which is dedicated to the fight against heart disease,” said Darren.

Come rain or shine Darren and his team mates will have to keep walking; through the night they’ll be walking through dark woods, shadowy roads and spooky lanes.  They are hoping to complete the walk in around 28 hours and have spent the last four months training.

Darren has already raised £540 – to sponsor him visit http://www.justgiving.com/Darren-Holmes6

We normally provide a quote within two hours of receiving a job specification; if not…it’ll be the same day. Email us on sales@print-leeds.co.uk or ring the sales team on 0113 290 0340