One of our newest members of the team, Isobel Hainsworth-Brear, took part in the Pink Ribbon tour in London last weekend with a group of friends raising over £500 for Breast Cancer Care.  The ride was 25km long representing 25 years of Breast Cancer Care.  For 25 years the Pink Ribbon has been a symbol of hope, strength and unity for everyone affected by breast cancer.

Almost 1,000 women (many wearing pink) cycled 25km through central London in celebration of the Pink Ribbon on the morning of The Women’s Tour final track.

The riders were cheered on by supporters including the Mayor of London, Sadiq Khan, and Denise Lewis, the 2000 Olympic heptathlon champion. The Mayor even gave a “high 5” to some of the cyclists and shouted “good luck” to Isobel as she began her ride. 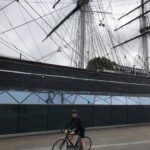 We normally provide a quote within two hours of receiving a job specification; if not…it’ll be the same day. Email us on sales@print-leeds.co.uk or ring the sales team on 0113 290 0340